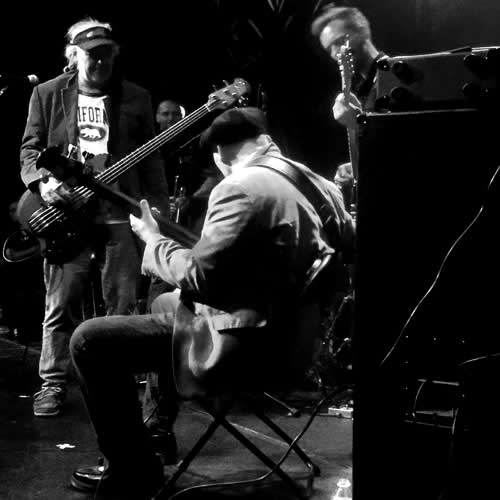 The revolution was heard at London’s Rich Mix on Friday as a billionaire worth of basses achieved new frequency. Chris Bowsher’s RDF along with Youth and Jah Wobble debuted A Very British Coup with Mark Stewart, setting impassioned new standards for myth making and music as harsh glory sounded and revived opposition through dub, trance and invective, personality clash, poetry.

Jerusalem was raised to the ground as the call for change resonated. From Mycal One Dread’s support act, to the dark fruitful flavour of Foster, Wobble and Youth’s twelve string jam, the ground itself seemed to move as possible horizons were altered and the farce and limitations placed on us, were coruscated by music to create reformation’s new language: one that we can all understand.

It was the new place to be and the new site for becoming. RDF’s Daydream Dystopia album is a positive sermon from the mount. With Wobble and Youth as High Priests and Mark Stewart as a darkly sneering Pilate, belief was ‘lazarused’ from a music that taught the audience true resistance and the imprisoned heart how to shout.

Apocalypse riders beware: there are new horseman coming; words and guitars are their weapons, rousing us all. Truth is loud.

Next Event
Facebook
It is with regret that Suriya Recordings announce the cancellation of the Suriya and YouthSounds “Mind the Gap” festival on September 28th at Rich Mix London. Our apologies to all the artists and their fans but, due to unforeseen circumstances, we are forced to abandon the realisation of the event. Renato Roversi Suriya Recordings. ... See MoreSee Less
View on Facebook
· Share

🆕 Here's the first teaser from our upcoming alb