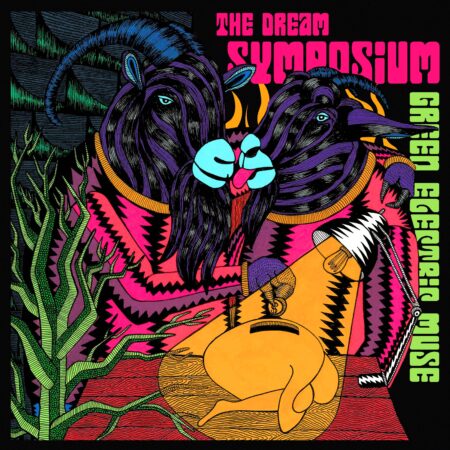 With stirring echoes of Fripp, Floyd, Cluster and the ‘Dead,’ Green Electric Muse is gem of ambient experimentation, moving from psychedelia to soundscape and trance. It conjures and revives a new form of innerspace rock, soundtracking the private forces within people, alongside lost city requiems. Two twenty minute pieces combine European progressive and ambient traditions into a searing new mix of invention. With Youth on bass and keys, Italian guitar Maestro Emilio Sorridente, The Gulps‘ lead guitarist, Francesco Buffone, alongside Michelangelo Nasso, and Enzo Di Massi, this musical mix becomes a positive cauldron of change and invocation.

The music chameleons as ghosts reclaim shadow. Aquatonic captures the sound of a spacecraft taking off. It is a Tangerine Dream of green that has suddenly turned to blood orange. A Force Majeure as persuasive as the joint that unrolls you, as Intercity arrives with a fugue of traffic to make an electric tone poem, as guitars cry through sound gutters, forming an ambient manifesto of people as place. Started as jams, the musician’s experiences distils sugar to make a gem of bright invocation. Produced by Youth, this vital new release shows how haunted streets bleed with music and help to heal night.