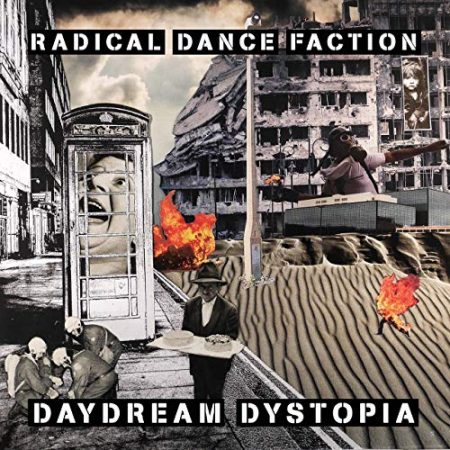 With its punk fired scrowl and ska driven tremours

They seek a new future formed by their founding father Chris Bowsher,

Sound. Daydream Dystopia shows the mire we have allowed to grow over,

We despise. And yet these songs fuse and form as Bowsher’s buried Brecht stalks the social, declaring dread and desire through both sharp confrontation and stark, sad reflection in an old man’s eyes.

Thick drapes of sound chime and charm as the radical dance moves each freedom. Across scars and salvation RDF

Leave their mark. The calls have been charged. All debts are off. Bowsher’s waiting.

Return at once. The receiver is waking you up from the dark.

Each song charts the change of breath into fire. The music struts and surges as each lyric arcs, and also arks, as Bowsher’s words provide shelter. RU1. Rogue Trooper. Each song wields the weather to prise open endeavour through the bite and the burn of craft’s spark.

Across promise to show that the sounds of the future in Bowsher’s words,

‘would,could and should’ be better than the broken hands we’ve been dealt.

The Radical Dance dances on.

You are the faction

That recognises the glory

In everything you once felt.